Active traffic management along Oregon’s Rte. 217 makes for a better way to drive

Oregon Rte. 217 (OR 217) has always been a nightmare for drivers on Portland’s west side.

The limited access highway runs north-south for 7.5 miles through the western suburbs of Beaverton and Tigard between U.S. 26 and I-5. Traffic on this highway has more than doubled over the last three decades, which has significantly degraded the corridor’s safety and reliability, because it is consistently operating at or, more often, above capacity.

Due to limited public funding for expansion and improvement projects, the Oregon Department of Transportation (ODOT) has focused on lower-cost safety and efficiency improvements. To help address the increasing safety and reliability concerns, the OR 217 Active Traffic Management (ATM) project was deployed in July 2014.

The OR 217 ATM system is a comprehensive implementation of automated technologies to improve the operations and safety of the freeway system. ATM strategies improve traffic flow and safety using integrated systems and coordinated responses to dynamically manage traffic based on prevailing roadway conditions. The OR 217 ATM project is composed of six systems that work together to address safety and reliability goals. These systems include travel time, queue warning, congestion-responsive variable speed, weather-responsive variable speed, dynamic ramp-metering and curve warning.

The use of active traffic management strategies to manage existing transportation systems efficiently has grown as major capacity increases are limited by financial and land availability constraints, especially in urban areas. With the success on OR 217, additions to the RealTime system, as it is known, are under development on several other corridors in Portland and throughout the region.

With over 122,000 vehicles per day, OR 217 often operates at or above capacity during both peak and off-peak hours with highly unpredictable traffic patterns. The total traffic volumes doubled between 1985 and 2005, and by 2025 traffic volumes are expected to increase by another 30%. 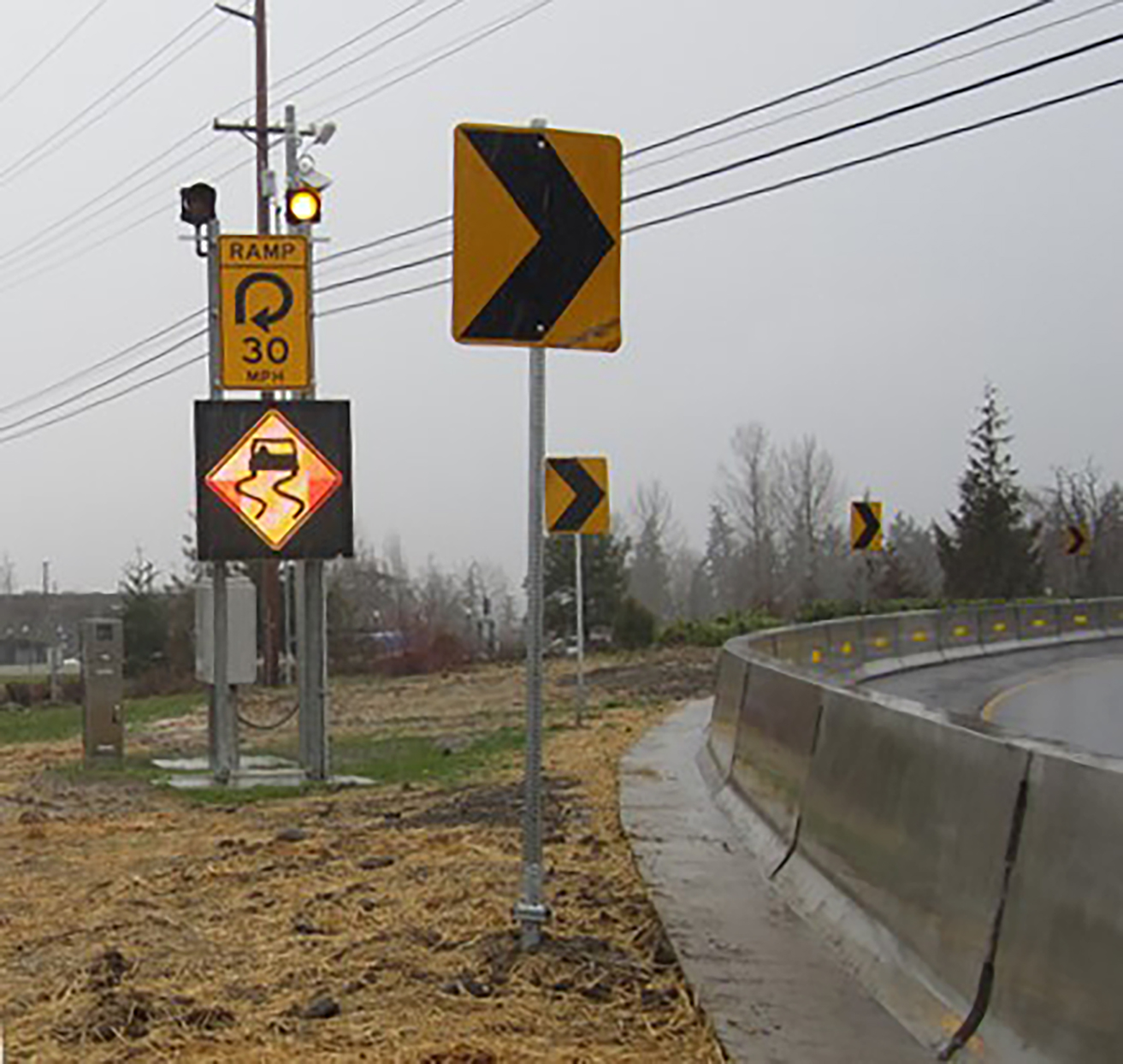 A variable message sign alerts drivers to a wet and hazardous curve.

The OR 217 ATM project was deployed in July 2014 to help manage the transportation system by responding to prevailing road, traffic and weather conditions in real time, in order to increase safety and operational reliability. To achieve these goals, a synthesis of overlying systems and physical infrastructure were utilized to provide travelers with information to safely and efficiently travel throughout the corridor. Key performance measures to assess these goals were analyzed before and after the installation and implementation of the OR 217 ATM project. These key performance measures include crash rates, vehicles per lane per hour (VPLPH), average corridor travel time and travel-time reliability.

Crash rates were evaluated based on type, severity and roadway conditions along defined segments of the treated corridors. One objective of the OR 217 ATM system is to reduce the frequency and severity of crashes associated with congestion, unpredictable traffic queues or possible hazardous roadway conditions such as low visibility or slippery surfaces.

Average travel times help establish baseline recurring congestion levels, which are based on geometric limitations or lack of capacity. Traffic volumes also are assessed with average travel times to evaluate throughput objectives. Decreasing average travel times along with higher VPLPH indicate improvement in spatial variations between vehicles, resulting in a more efficient movement of people and goods throughout the corridor. 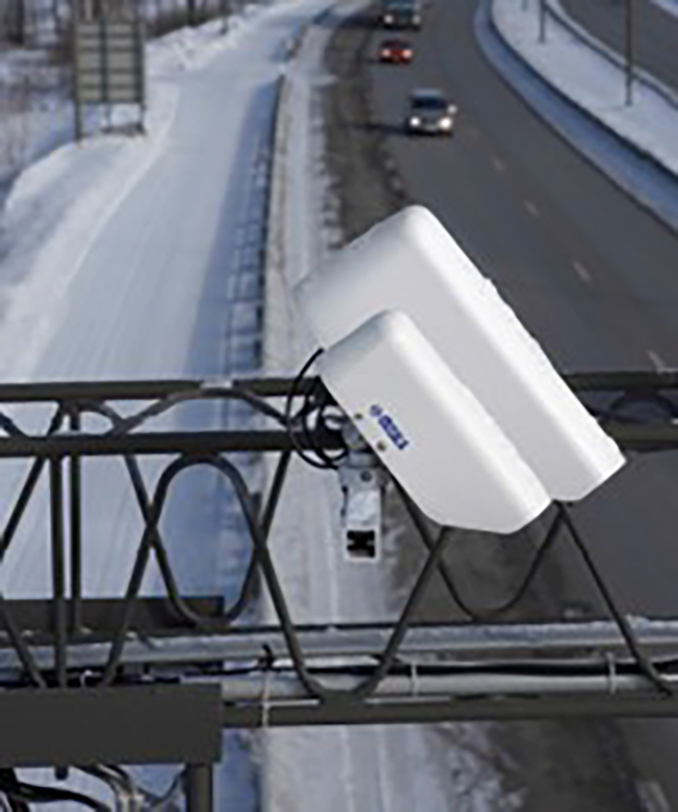 Sensors and cameras are stationed throughout the corridor to gather real-time traffic data.

The six aforementioned systems of the OR 217 ATM project interact together and share much of the same physical and informational infrastructure.

System information is obtained and exhibited through physical infrastructure. The OR 217 ATM system utilizes a robust set of sensors including Bluetooth, radar and inductive loop detectors to gather vehicle speed, occupancy and volume data along with roadway weather sensors to detect hazardous roadway conditions. This information is processed and distributed to the motorist by means of variable message and variable speed signs located throughout the corridor.

The travel-time system calculates how long it should take drivers to reach common destinations using real-time traffic information. By providing travel-time information, drivers can choose an alternate route or alter an existing trip. Travel-time information also improves safety by alerting motorists to the potential level of congestion along a route. All variable message systems must meet driver expectations, and be easily understood, relevant and up-to-date.

The queue-warning system notifies drivers that slowing or stopped vehicles exist ahead, signifying a reduction in expected speed. The primary purpose of the queue-warning system is to alert drivers to the significant difference in speeds and considerably reduce the number and severity of crashes, especially rear-end crashes, that are related to unpredictable congestion throughout the corridor.

Variable advisory speed (VAS) systems are used to proactively manage vehicle speeds. This system automatically adjusts the advised speeds on the highway based on current downstream traffic conditions. The primary purpose of the congestion-responsive variable speed system is to minimize the spatial and temporal variations in speed that can lead to additional crashes and increased congestion.

The primary purpose of the weather-responsive variable speed system is to notify drivers of inclement weather and display appropriate advised speeds and weather warnings for possible hazardous roadway conditions such as low visibility or slippery surfaces. Speed reduction values are based on grip factors. Appropriate traveling speeds are based on visibility and grip-factor values for various weather conditions.

The central ramp meter control system (CRMS) is an application that collects field data from station locations, processes this data, and distributes the data to appropriate applications. The system controls the dynamic ramp meter functionality through SWARM and includes user interface capabilities required to allow users to both monitor system performance and alter parameters as needed. 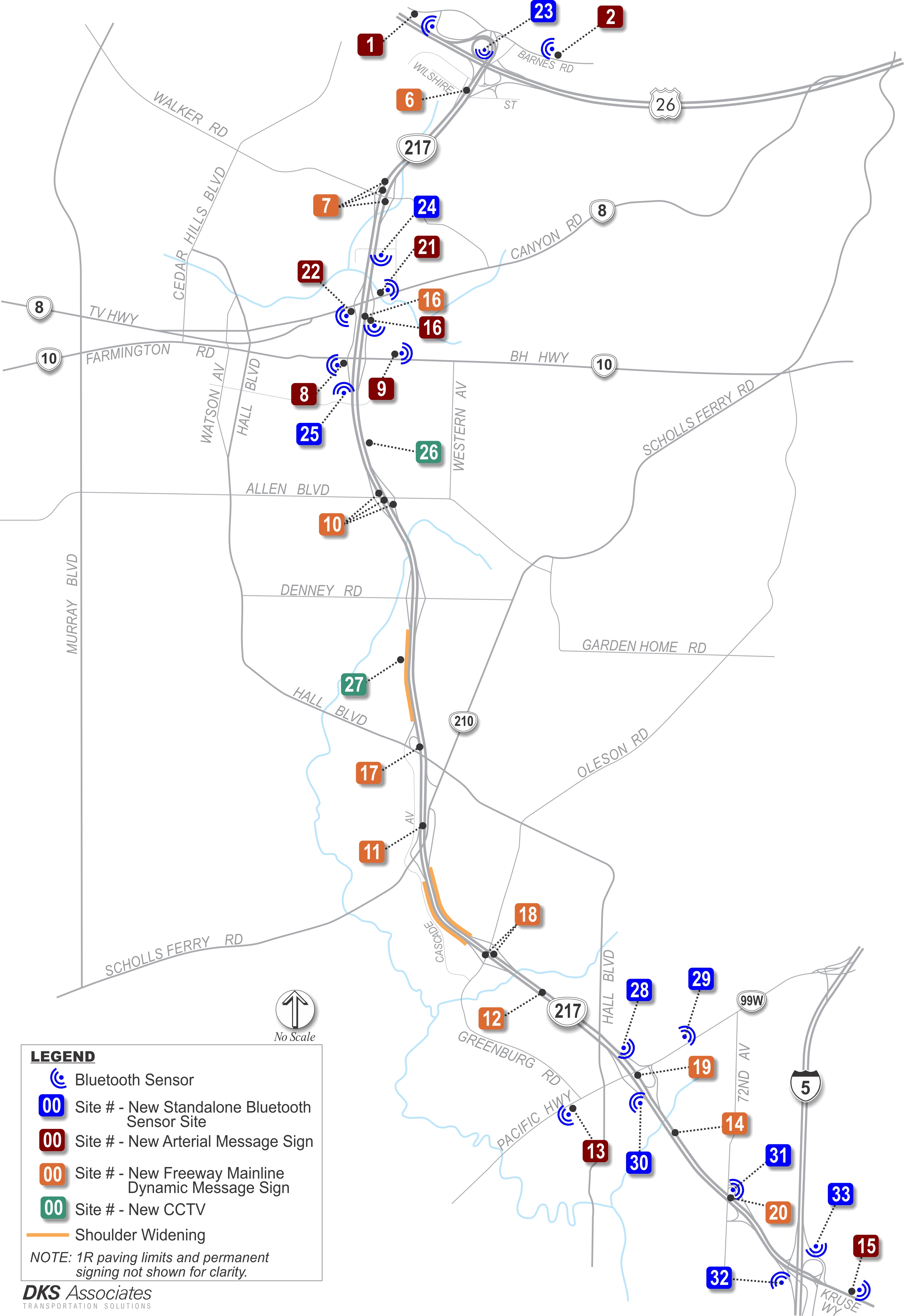 Site locations for all message signs and data-collection points along the corridor.

The effectiveness of the OR 217 ATM system on the improvement of operational and safety goals was evaluated via real traffic data. The results indicate a significant reduction in crashes and crash severity as well as improvements in reliability indices, all while incurring an increase in peak-period VPLPH.

Data indicates a reduction in total crashes of almost 21%, with a significant (60%) reduction in severity. The targeted crash type (rear-end and side-swipe overtaking) associated with congestion also were reduced. Wet/icy surface-condition crashes increased by 17.5%, but the number of days with rain recorded by the National Weather Service for downtown Portland during the same time periods evaluated increased from 51 days prior to OR 217 ATM project activation to 63 days after activation. The increase in days with rain is compounded by a nearly 55% increase in precipitation levels over the same period. Not only did it rain more often, it rained harder.

The most dramatic reductions in WCCCA reported incidents were revealed in the seasonal transition months. These time periods are critical for appropriate weather speed advisories based on the conditioned response of motorists travelling in familiar conditions. As the conditions change or become inconsistent, the importance of traveler information to inform the driver of potentially hazardous roadway conditions is magnified.

The OR 217 ATM system safety benefits also include localized curve-warning applications. The weather-responsive system was utilized to activate curve-warning VMS on three of the four ramps at the interchange of U.S. 26 and OR 217. Before-and-after crash results indicate a significant decrease in crashes (40-60%) and crash severity (70-92%) at these historically volatile locations.

The initial deployment and operation of the OR 217 ATM project indicates the potential of ATM strategies to improve safety and reliability measures. This evaluation reveals that 86% of the total crash reduction can be associated with the targeted congestion crash types. This contributed to a nearly 10% improvement in overall travel-time variability as indicated by the buffer time index. The average travel time has been maintained through an increase in VPLPH of over 5%. Further evaluation will provide guidance to refining these strategies to maximize benefits.

As congestion persists, understanding how best to utilize ATM strategies will be a valuable tool to counter the safety and reliability problems associated with increasing traffic demand. ATM strategies can take advantage of developed software and infrastructure to capture the full capabilities of the existing roadway facilities and improve safety throughout the corridor.

We respect and are committed to protecting your privacy. As such, any personal information we collect on this website will be kept in the strictest confidence, and never released (either shared or sold) to any third party organization.

If you feel that we have misrepresented this policy in any way, please do not hesitate to contact us.